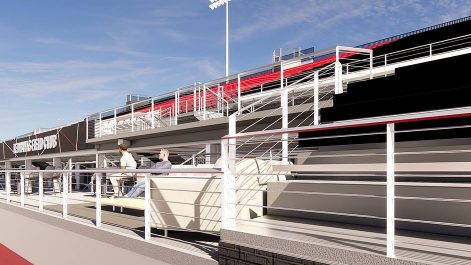 Southeast Missouri State University's Board of Governors authorized the administration to proceed with awarding a contract to Fager-McGee Commercial Construction during its meeting Tuesday for the first phase of a new transformational Houck multiuse complex.

The $15,978,100 contract includes the construction and replacement of the south sideline and grandstand of Houck Field as well as new seating, turf replacement, concession stands, restrooms, ADA access, and associated HVAC, mechanical and other systems work.

''We are thrilled to move forward with the first phase of this project that will improve our football and soccer facilities which were over 90 years old,'' said SEMO Director of Athletics Brady Barke.

Barke says in addition to benefitting the football and soccer programs, the new facility will increase the fan experience as well. The full Houck Project will offer not only improved athletic facilities but also needed academic spaces.

''When we talk about the Houck Project, we aren't just talking about the stadium,'' said Dr. Carlos Vargas, president of Southeast Missouri State University. ''It is a multiuse complex that will include a facility with classrooms, labs, and offices to support STEM, health, life, and allied health sciences research, and academic programs.''

More specifically, potential laboratories incorporated into the new facility may include an allied health laboratory, a biology (physiology) lab, a virtual anatomy laboratory, and a life science (biomechanics) laboratory.

Last fall, the University and the Southeast Missouri University Foundation identified approximately $12 million to initiate the project. This summer, Southeast received $11 million from the State of Missouri approved by Governor Mike Parson for the complex.

''The study found the multiuse complex would add $31 million to the economy including the construction spending impact as well as the long-term visitor spending impact which is projected to increase by nearly a quarter million dollars per year,'' said Vargas.

Barke said, ''Once construction is underway, discussions will begin on design of the remaining phases, which will give us additional details on cost, so we can start work to fully fund the complete project.''

Phase one of the project has an anticipated completion date of August 2023.